Bej Zamna Waldorf School:  An Interview with one of the Founders

Information on the new school opening for children in Cozumel…. 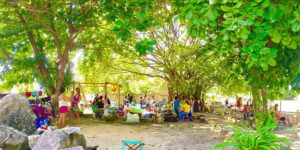 Teaching children to take care of the planet is an insurance policy for the future.

Waldorf educators know that by cultivating a personal relationship with the Earth and her resources, young people can develop a genuine ecological consciousness.

We should welcome this new Waldorf school Bej Zamná who means the way of wisdom , because it is a hope for the island who was distinguished as Biosphere Reserve by UNESCO not long time ago. Waldorf Schools are  members  of the UNESCO Associated Schools Project Network.

I would like to share with you today this beautiful project who changed my life and the lives of all the people who are part of it and you will be soon .

Because it is not only a school that we are talking about ,the challenge is to raise awareness  in the community . How? Creating a community area ,the school will become  a place the afternoon where free workshops  will be held for the community of Cozumel, such as agriculture, natural product development,food healthy care, welfare, talk about endangered species, sustainable construction …

“We are 6 families who, together with early childhood educators have come together because we want, something 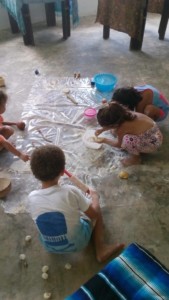 better for the local children. This project was born out of a need for a change in education as well as community on Cozumel. As a group, we are committed to creating a better Cozumel.”

Waldorf education, also known as Steiner education, is based on the educational philosophy of Rudolf Steiner, the founder of anthroposophy. It is a methodology that responds to fundamental aspects such as what to learn, when and how, fully preparing children to live in harmony.

Small interview from Elsa Anderson one of the founders of Bej Zamná .

Elsa Anderson Smith could you tell us how this waldorf project started on Cozumel?

Well personally I have been looking for Waldorf since I first got pregnant back in 2014, and found that there were some schools on the mainland but not a mention of that teaching style on Cozumel. Fast-forward to 2016 and I have just put my son in one of the local alternative schools when I hear talk of a meeting. Vanessa  Nini, who also had her son in this school was hosting a meeting to see what kind of interest there was on the island to start a Waldorf Inspired School. I had by then read a lot about Waldorf education and applied it in our home life as much as possible. The idea of a school on the island was a daydream I thought I wouldn’t see in my lifetime. The meeting was a great success and we had around 30 interested parents and local adults who wanted to push this notion forward. In the following months several of these then passionate speakers showed their true colors and didn’t do much to propel the project. I, myself would have much preferred to stay in the shadows and just wait until it was all done and I just sign the admissions form, who wouldn’t, right?

Had we not had the 6 founding families be so strong pursuing this dream from day one, the project would have fallen apart. By January we had several parents telling us that they needed the school to open this coming school year so that they could enroll their children, because they were no longer happy with the local options.

We traveled to the schools in Quintana Roo to hear their stories, ask for advice and learn more about what comes next. In April we had news of a possible teacher. She had been one of the founders of a Waldorf school near Mexico City and had more than 15 years of teaching experience. She heard our call and it was very timely as she herself was looking for her next challenge. The school that she worked at now offered education from infancy to university!

In the following weeks we needed to raise funds to bring her to Cozumel so that we could meet her, and show her the beauty of the island. We held a raffle & market at Wet Wendy’s, and thanks to the generosity of so many people we were able to have her come in June. On June 16th we had our first Parent Info Meeting hosted by our lovely teacher, Claudia Fernandez. Parents were then given a chance to ask any questions and hear more about what makes Waldorf different. So many parents left that meeting with a glow of hopefulness that there will finally be a school for their children, including myself!

Could you tell me why do you think that Waldorf education can be an answer to the actual environment problems?

I believe that children are good and care deeply for others, animals and the environment. They are taught to look away, or to imitate bad adult behavior that is damaging to the planet. Instead of having them close their eyes and remain in the damaging cycle that we have been in for the last 120 years, Waldorf education believes in the abilities of children and gives them the tools to use their innate abilities for good. A large part of the curriculum is based in nature and being outdoors. If a child is made aware of their surrounding nature, ecosystems and species, how could they then in good conscience do anything to harm it?

What next? When does it start and where it will be?

We have now secured the property on which the school will start. It’s a small house that offers a breezy shaded area for the children to do all the indoor based subjects that their curriculum requires, bedrooms for nap time and a very large garden space for growing our own food and free exploration during recess.

The house is currently being renovated and the garden cleaned up so that it is safe for the children to roam in. I’m excited to say that we are open for admissions until July 20th and school starts for children ages 3 to 7 this September!

How can the people help this project?

The dream is to have this school be open for families of all backgrounds and to offer education for the entire local community with after school programs, weekend and evening workshops that are completely free of charge. We are also planning on offering discounts for single parents and low income families by having their school fees be covered by donations. That way we can accept a child who can only afford to pay for example 50%, yet not jeopardize the quality of the education, teachers and materials.

Many schools start out with good intentions and end up becoming lucrative business models. That is not what we are about. This school is meant to benefit the local communities and raise the general level of education on Cozumel.

That said, we are in our early days and starting up is always a challenge. The list of supplies needed to start school this September is long, but thankfully many items can be donated second hand such as a stove, fridge, etc. People with valuable skills such as carpentry, plumbing or any set of able hands are more than welcome to give us a call or email – The more hands we’ve got, the better!

We have also received several donations via PayPal, which has helped us pay for inevitable repairs and necessary lawyers’ fees – this is a great way to help from afar!

In the near future we will also love to hear from people who want to host workshops for the local community. To protect our beloved Cozumel, it all starts with education!”

There is already program running to “Enhance a life”sponsoring a child who can not afford the school fees .Ask for it! As much as we can we try to let childrens get into it.Just ask to info@waldorfcozumel.com .

All donations are welcome to get the school ready .you can find a paypal link on our web page

Help us with material, here is few things that you can bring to us from your country:

Like for example a Pasta Maker Manual : the children learn how to make their own food and no fast food.   Stockmar block crayons…

Soon Bej Zamna will organize a beautiful event  like an Art Auction , with beautiful painting offered by by famous painters of island like Galo, Niurka Guzman and others talented painters. It is a nice opportunity to acquire artwork and helping the school at the same time. As soon it will be ready we will let you know about it .