COZUMEL, February 2021 –  Given the crisis generated by the Covid-19 pandemic, the private sector frantically raised its voice petitioning federal government’s help hoping the “Law on Islands” can be enacted in Cozumel for the best interests of its economy and thus provide basic services to the close to 90 thousand people that live in it.

The petition was made by the Business Coordination Council (CCE), by the Employers Confederation of the Mexican Republic (COPARMEX) as well as other by other business groups, all coming together seeking the same rights and services that the rest of the Mexicans who live in the mainland have.

In the request made by the 17 organizations forming the Business Coordination Council (CCE) it was made known that this petition is not exclusive for the municipality of Cozumel, but they raise their voice also  for the benefit of other islands in Quintana Roo – Isla Mujeres and Holbox-, as that said law would bring benefits and tax incentives in transportation, business and energy (fuel and electric power), which would enable competitiveness as a destination.

The petition prepared by the business sector was addressed to the President of the Republic, Andrés Manuel López Obrador, and contains the following items:

Representatives of different Chambers are expected permanently keep a social media campaign adding others into the petition, thus creating an echo and that the Federal Government authorities promptly take the necessary steps on the matter given the adversity faced by the pandemic which the business community has described as a “humanitarian crisis.”

On the one hand, government authorities celebrated that after six years of absence, on Saturday February 13th, Frontier Airlines returned to Cozumel with a direct flight from Denver, while American Airlines began its flights from Philadelphia. However, throughout the week several flights from Dallas were cancelled due to the prevailing winter storm in that county.

To the effect, both the tourism and the Cozumel international Airport Authorities informed that the Philadelphia-Cozumel flights will be offered on Saturdays, a weekly basis, by American Airlines. The aircraft will gave a 100 to 120 passenger capacity, so it is expected that occupancy will be over 70% for these flights.

As well, Jorge Campos Romero, head of the airport administration mentioned that after six year of absence resuming Frontier flights from Denver will be positive.

Furthermore, flights from Miami, Denver, Chicago, Minneapolis, Charlotte, Houston, Mexico and Dallas were also revealed, although the latter ones were cancelled this week due to bad weather in the US., but conditions are expected to improve during the rest of the week.

LEAVING BACKPACKS ASIDE TO HELP THEIR MOMS

Notwithstanding the existing community DIF programs to assist children, a couple of them have decided to go out wash cards and sell hand-woven flowers made with guano leaves in order to get a tip, so each of them may be able to help with food for their siblings and their school supplies.

That is the case with Cristian “N” and Emmanuel “C”, 12 and 15, who early in the morning go to supermarkets or convenience stores, among others, with the intention of earning a tip which they divide between them to take home at the end of the day.

Both teens agreed in selling flowers woven by their own hands with guano leaves and, in their opinion, is nothing bad as they have other friends of their age who have gone down wrong paths. So, they chose to put this flower crafting into practice and sell them to every client that leaves different businesses .

Though barefoot, Cristian and Emmanuel offer to take care of motorcycles while people go shopping, and suggest they can “wash” the vehicles, particularly motorcycles. Both teens keep their flannels in an area where they can be seen every day, and also have bottles with detergent and others with water to perform their job. They said: “We do it honestly because we know nothing is free in life; one has to work.”

These two youngsters acknowledged that online classes have been complicated as they do not have mobile phones nor internet at home. But they try to catch up at night or throughout the week, mostly because they have to raise money to buy their school supplies; bearing in mind that in both cases their moms – heads of each household-, must go out to work in order to meet the needs of their other children. This has motivated them to take advantage of certain hours in the day selling flowers and washing motorcycles.

Authorities from the Municipal DIF office have approached the children’s families and have given them guidance in order to prevent the children from being exploited. However, in both cases they have assured that regardless of the scolding, they will not stop selling to help their families, because they do not mind bringing home even 20 Pesos, as that money is enough for a kilo of tortillas and they can eat. 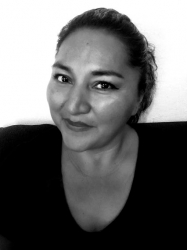 Kary Carrión
Kary Carrión is 100% Cozumelena down to her bones.She’s a lover of Cozumel’s famous sunsets.

With 17 years of journalism experience here on the island, she’s always invested in right and just causes and helping the island community in a respectful manner.Above all Kary likes to share the natural beauty and wonders of the island where she grew up and she and her family continue to call her home.

She’s been a correspondent for Cozumel for the “Por Esto” newspaper for more than 10 years.Kary’s articles have also appearedin State-level newspapers such as “Diario de Quintana Roo”; “El Quintanarroense,” “El Libertador”, “Revista Paki-Sport”, as well as various other forms of digital media – such as Cozumel 4 You.

Kary has also ventured into television news for both Channel 10 Notivisión, as well as Channel 12 Cozumel. She’s worked as a reporter and newscaster for SolStéreo Cozumel 89.9 FM, served as a Cozumel correspondent for the newscast Enfecto Radio; as well as for other digital radio platforms includingPuerto Morelos 89.1 Frecuencia Mágica Oficial

It’s her belief that the pen carries a great responsibility, therefore she always keeps to a ethical form ofjournalism and writes with commitment anddedication to her parents:the pillar of her life. Her children, brothers, nephews, friends, andlove for Cozumel are are from where Kary Carrion draws her strength.