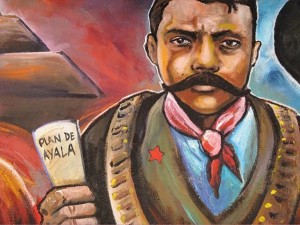 Many have heard the names Pancho Villa and Emiliano Zapata, but are you familiar with their role in Mexican history? Well, these two characters played a significant part in the Mexican Revolution. Almost 90 years after the Independence, by 1910 the armed movement uprose to finish General Porfirio Diaz’s thirty year plus dictatorship and culminated in 1917 with the proclamation of a new Constitution.

Porfirio Diaz had reelected himself nine times, and one of the consequences was social inequality: the rich were richer, while the poor were even poorer. Tired of the dictatorship and inequality, many rose up against Diaz and new political parties were born, the strongest being lead by Francisco I. Madero. Diaz accepted the proposal of a democracy; however, before the elections, he got Madero out of the way and had him incarcerated. Supported by his newly created party, Diaz self-proclaimed president once again. Madero was later released under the condition that he should leave Mexico City.

Madero left the country and traveled to San Antonio, Texas from where he launched a call to arms: “…on November 20 starting at six pm onward, all citizens in the Republic will take up arms to overthrow the dictatorship…real democracy, no reelection.” The conflict began on November 18 when Aquiles Serdán, a fierce revolutionary, was murdered. Uprisings began. In the north José Doroteo Arango Arámbula, also known as Francisco Villa or Pancho Villa, whose moniker was “Centaur of the North”, lead the revolts.

Soon after Diaz’s army was defeated, the Revolution extended throughout the country and although Diaz unsuccessfully tried to negotiate, he was forced to resign and left for France. By then, 1911, Madero became president of a very unstable country and as he kept some of Diaz’s staff in office, this gave rise to new armed revolts in the State of Morelos lead by Emiliano Zapata against Madero. Victoriano Huerta, who was in charge of Madero’s army, played a double role planning, with others, to overthrow Madero. In 1913 the “Ten Day Tragic War” took place in Mexico City and Madero was murdered.

Huerta became president; however, as he was unable to create and hold a positive image, in 1914 the revolutionaries and Constitutional Army forced him to resign. Venustiano Carranza, who helped overthrow Huerta, then summoned a meeting of the revolutionary forces, called elections and became interim president. Pancho Villa had been loyal to Carranza, but Carranza’s constitutional ideals were not accepted by Villa and Zapata who, by then, had become allies and advocates for the people. As Carranza did not recognize Villa’s armed forces as the North Division, he ordered General Alvaro Obregon to kill Villa who, in turn, fled to the north again. Meanwhile Zapata continued his revolts in the south, defending his mottos “the land belongs to those who work it” and “Land and Liberty!” Villa is famous not only for being a revolutionary but also for his 75 “legal” marriages, and his assault to Columbus, New Mexico as retaliation to the support given by the U.S. to Carranza.

An 11 month search undertaken by U.S. troops led “Black Jack” Pershing to capture Villa, was unsuccessful as Villa disappeared somewhere in the large territory of Chihuahua. With the passing of time, Villa’s and Zapata’s armed forces were diminished, becoming small guerrilla groups. Villa was ambushed and killed in 1923. A legend says that Zapata was not killed in 1919, but had fled to the Far East; another tells that on nights of full moon he could be seen riding his horse. Zapata is attributed the authorship of the quote: “I’d rather die standing than live on my knees.” Given the distance from

the central parts of Mexico where the Revolution had taken place, its Constitutional influence arrived to the State of Yucatan 5 years later (1915), after several attempts to overthrow the governor; while the Federal Territory (Diaz’s 1902 decree) now known as Quintana Roo had been undergoing its own problems with uprisings of the Maya peoples against landowners who held large extensions of land bestowed to them by Diaz and the tug-of-war as to the annexation of the Independent Territory to Yucatan. Elections were called in 1917 and Carranza was elected president. Finally, the reformed Political Constitution of the United Mexican States is proclaimed on February 5, 1917.

Monica Sauza, a court certified translator, has been assisting island residents with translations and immigration issues.