The largest caribbean island in Mexico, Cozumel, sits just on the eastern edge of the Yucatan Peninsula.  Known for azure blue water, pristine coral reefs and gentle currents that sweep divers along, Cozumel is arguably one of the premier dive spots in the entire Caribbean.  Settled by the Mayan originally, what once was a small fishing community has now become a mecca for watersports enthusiasts and triathletes worldwide.

Cozumel measures 48 kilometers (30 miles) from north to south but only 16 kilometers (10 miles) from east to west. The island’s commercial and residential center, San Miguel, is located on the leeward, or eastern, side of the island, and flanked by both a north and south hotel zone.  There is also another smaller town, Cedral, located toward the south.  Generally speaking, most of the development occurs between these two areas, although there are a few establishments found on the western, or windward, side.

Colloquially called the “wild side” the windward side of Cozumel is composed of natural, undeveloped  beaches, crashing waves, and very strong currents.  Where the ironshore rocks meet the ocean it’s not unusual to find natural geysers and Jacuzzis caused by wave action.  Visitors will also find  local beach clubs serving extremely fresh seafood and icy cold beer. This side of the island does not have electricity, so most of these locations close when the sun sets or the mosquitoes come out, whichever comes first.  .

Recently renovated, Cozumel is home to a modern international airport, with free, easily accessible wi-fi access throughout the downtown shopping areas and all public parks.  Several major grocery chains, including Commercial Mexicana, have locations on island, and carry a wide variety of national and international products, a in-store bakery and a liquor section.  In spite of all the modern amenities Cozumel still retains the charm of its Mayan/Mexican roots.  Cozumel is an extremely safe island, with a very low crime rate, as opposed to some other tourist destinations in Mexico or the Caribbean. There are several festivals, such as Carnaval and the Feria de Cedral celebrated annually.  For a more information on island events click here.

Cozumel sits alongside the Mesoamerican Reef System, which is actually the second largest barrier reef system in the world.  Strong currents are the norm, which create virtually effortless diving, as you drift along the reefs.  Another benefit of the currents is outstanding visibility.  It’s not uncommon to have 120ft/35m viz, with 80ft/25m being the norm.

The island boasts 25 major dive sites, all of which fall under protection of the National Marine Park.  Certified Scuba tours are lead by divemasters or instructors, who are also registered park guides.  Since all dives are drift dives, they are generally conducted from a boat that follows the divers along and collects them afterward.  Since the majority of the dive sites are so close, most dive operators offer both morning and afternoon 2 –tank  trips, about 4 hours in duration.

Non-certified divers can take advantage of a 2 hour resort course, where they will learn the basics, and even complete a reef dive, while under an instructor’s supervision.  It’s also very easy for divers to complete their certification here in Cozumel, or even take advantage of continuing education courses such as Advanced Diver and Rescue courses.

The island itself has a large modern airport with several international flights daily.  The larger Cancun airport is only 45m/72km away, and is serviced by all major carriers worldwide.  There is bus service and taxi shuttles to Playa del Carmen, where ferry service to Cozumel is available, Ferries generally run every hour on the hour, however, it’s best to check the websites for an updated schedule.  There are 3 companies that service Cozumel: Mexico Waterjets, Barcos Caribe and Ultramar . There is also an island hopper flight operated by Maya Air from the Cancun airport to Cozumel.

The island boasts every kind of hotel accommodation, from luxurious 5 star all-inclusive hotels to moderate in-town bed and breakfasts.  The Cozumel Hotel Association’s website is a great place to start when looking into accommodations .  Another great option, especially for groups and families are rental villas and condos.  There are a variety of beachfront and in-town rentals to suit everyone’s needs and budgets.

Transportation While in Cozumel

Taxis are plentiful and relatively inexpensive.  Taxis come in  a variety of sizes, including larger vans to accommodate groups.  Taxi drivers are all members of a taxi union, with a published price list.  You can find current prices in their website.

If you’re looking to strike out on your own, there are a variety of vehicles available for rent, including, automobiles, electric cars, and even tuk –tuks, (small motorized carts).

Downtown San Miguel has been conveniently laid out so it’s very easy to get around.   The streets are laid out, grid-like, with the Avenidas running horizontal to the ocean, and the Calles perpendicular.  Avenidas  run in multiples of 5, while calles to the north of downtown are even numbered and calles on the southern side are odd numbered.  Most directions are given with the cross street included for reference.  Remember while driving  Avenidas have the right of way, so while driving on a  Calle you will generally need to stop at each intersection. Of course, exceptions to these generalizations abound.  It is prohibited to park in areas with a red curb.  Areas with a yellow curb may also have signage indicating regulations.  Cozumel Police will generally take the license plate off of your car, rather than ticket, so it’s generally a wise idea to pay  one of the many secure parking lots throughout downtown.  There is one main road that transverses the island, in route to the windward side of the island.

Cozumel’s official currency is the Mexican peso, but however the American dollar is almost as widely accepted.  In fact, in some of the more tourist-oriented shops and restaurants prices are listed in both currencies.  There are many “Casa de Cambios”” where a wide variety of currencies can be exchanged.  It’s common practice for merchants to accept both pesos and dollars but change is generally given in pesos.  The exchange rate fluctuates slightly daily.  You can find a current one here.

Spanish is the official language; however, English is widely spoken and understood.  Some German as well.

Most of the large hotels have a complete purified water system but some of the smaller hotels do not. Most, if not all restaurants cook and serve only purified water.  You can safely assume that all fruits and vegetables in restaurants have been washed in purified water, and that ice, as well, is safe.  The island runs on the standard 120 volt system.  If you’re arriving from Europe or somewhere with a different system you might want to consider purchasing an adaptor, prior to your arrival.

Cozumel has everything from fine dining to beachside eats, with everything in between.  Known for our extremely fresh seafood, you can also find regional  dishes from the Yucatan along with most American staples.  Here are also vegan and vegetarian options.  Most island restaurants are independently owned and not part of any franchise, however, there are both Burger King and McDonald’s on the island for the dedicated customers. There are so many options to choose from, check out Cozumel 4 You Business Directory, a great source of restaurants on the island.

360 tour of the island – Rent a car or hire a driver and set out to explore the island.  Thetransversal road passes right by some of the island’s best attractions, including the Mayan ruins of San Gervasio, the Eco-Park at Punta sur and even the island museum.  The official Museum & Park guide has great maps of all the parks and even where they’re located on the island.    In addition , during a drive around the island you’ll have the opportunity to check out some great beaches, scenic views and maybe even pick up a souvenir or two.

Snorkeling Tours – Cozumel offers snorkeling both from shore and by boat, the benefits of shore snorkeling is that you can explore on your own and at your own leisure.  Snorkeling by boat offers you access to the best reefs on the island, as well as  a guided tour, which is great for beginners.  Many companies offer a variety of boat trips which vary in location, length and services offered.

Deep Sea Fishing –   Every May Cozumel hosts a world class fishing tournament.  Sport fishermen from all over the world come to hook a blue or white marlin.  Throughout the year it’s not unusual to hook tuna, amberjack, mackerel, mahi-mahi and barracuda.    Fishing charters can be booked in 4, 6 or full day increments.

Aside from amazing scuba diving, a visit to Cozumel holds something for everyone.  Immerse yourself in the culture and the history, enjoy the pristine beaches, or partake in the freshest seafood around.  For more information about Cozumel, check out Cozumel 4 You, a great source of current activities and events on the island. 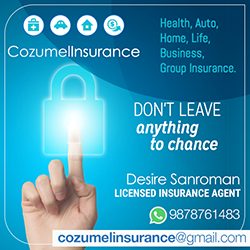