Team Creators of the Cozumel 4 You Website & Weekly Island NEWS

A list of the team  who provides content for Cozumel 4 You – Cozumel 4 You is the island’s number 1 source of weekly positive bi-lingual information.

An ex-Connecticut Yankee who has called Cozumel home for 20 years, Laura ran away to the Caribbean years ago, bumped around the islands teaching SCUBA diving, lost some time in Jamaica, and finally stopped in Cozumel for a 2 week vacation that hasn’t ended yet. With a degree in Journalism from a fancy private college she convinced her parents to pay for, Laura writes, edits, and creates the weekly  Cozumel 4 You news, promotional articles about the island, and her very own blog, which she finds hilarious. Her long suffering husband, the Fabster, has long since resigned himself to having zero private life, as he’s been involved in her various schemes and plots since his arrival. Proud parents to a variety of rescue dogs and cats, Laura continues to be the bane of her traditional Mexican mother-in-law’s existence, as she muses her way through life in the Mexican Caribbean.

An escapee from Mexico City, the Fabster has a degree in marine biology and is a PADI scuba instructor. Long-suffering husband to Laura, he’s been involved in her various schemes and plans for nearly 15 years now. He did get his revenge when he installed a mini lobster farm in their living room about a year ago.  When not on the tennis court, or skulking in a cantina, he devotes much of his free time to assisting in environmental causes.

Another escapee from Mexico City, Monica has  made Cozumel her definite home.  Since her arrival -in 1981- she worked in tourism in all the usual venues:  hotels, scuba diving, airport, ferries, until the opportunity to practice in her chosen field grew.  Since the latter part of the 70s Monica has been translating and interpreting, fully devoting herself to it since 1998, and has assisted foreigners and Island residents establish residence and businesses- She is a Translator with extensive experience, an avid historian and a great source of local lore and legends.

Originally born in Kirkwood Missouri Fred has spent the last 21 years of his  life living on the island of Cozumel in Mexico. A paradise like no other it has inspired him to become the photographer he is  today. Fred’s passion in photography is Landscape and Travel, as you can see from his photos. Enjoy these images as much as  he enjoyed taking them, let them transport you like they transport him.

Florent, also known as Flow, is a French photographer born in Paris in 1983. He studied the art to write with light at the New York Institute of Photography. After living in London and then Dublin, Flow settled down in Cozumel, Mexico in 2008. Cozumel is where he developed his love for landscape photography. He also enjoys creating portraits in his studio —or using the beautiful Caribbean landscape— with the help of his wife Marena Serfati.

“Photography takes an instant out of time, altering life by holding it still.”
Dorothea Lange (1895 — 1965)

Teresa is a huge fan of both singing and dancing, and since Cozumel has so many places to hear great live music, she’s become quite the expert. Originally from Texas, she has spent nearly 10 years in Cozumel. Teresa is an active volunteer for the Humane Society of Cozumel island and  is the owner of Salon Cielo, a full service salon offering an array of services for both hair and nails.

Mandy is a self-described “Tropical Literary Hermit Crab.” 4 years ago she dragged her 3 cats from Alberta to Quintana Roo and resolved to spend more time reading, writing and getting covered in fur. So far, so good! Her writing has been featured in Playboy, Earth Island Journal, Cracked and Be a Freelance Blogger.

Greg first came to Cozumel in 1988 to scuba dive and enjoy the beaches of the east side of the island. He immediately fell in love with the island and its people. His dive master convinced him he should look into buying a house here… turns out his other job was as a real estate agent. Long story short, he bought a house here on that very first visit. Greg came back to Cozumel at least twice a year for the next 10 years. In March of 1988, on the first night of his much needed vacation, he met Liliana Macotela. This encounter changed everything.By the end of that year, he had sold his business, packed up his engraving machine, and moved here to the island. He opened his working studio/gallery, called Galeria Azul, in the downstairs of his home. He is still there to this day and just celebrated 17 happy years of living here on the island with his wife, Liliana.

Director of The Magic of Design Furniture and Interior Design in Cozumel, Mexico. As a client of hers once  said, when they dig up Cozumel thousands of years from now they will find her imprint everywhere. Having touched over 1000 homes and condos in Cozumel, her design is throughout the island. Learning to navigate living as an expat and working on an island in a country with a different language has taught her so much. She no longer takes so many things for granted and  loves the quirky island where she lives. 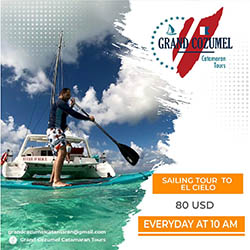 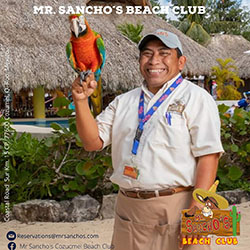