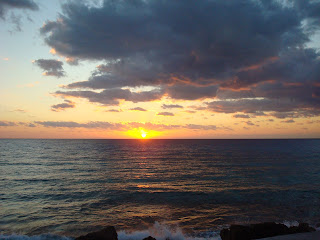 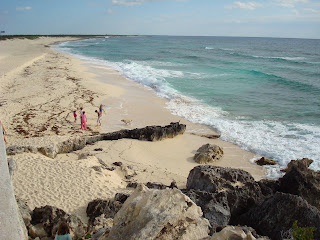 We just got back from beach camping on the other side of the island. Frankly, I’ve never understood why we call it beachcamping, since we actually stay in the wind powered hotel, and pitch the tent, just for the kids.
This is generally how it works, Lisa from Rock n Java, (http://www.thaicozumel.com/contactus.html) calls us all and we pack up, dogs, kids, bedding, coolers, ice and way more food than any of us can possibly eat. We then agree that this time we’re getting there early, as opposed to all the other times when we skated in just before dark and had to pitch the tent with flashlights.
We still arrive just before sunset on Saturday. Since the other side of the island is completely undeveloped, the hotel is windpowered and cell reception is non-existant, it’s a chance to completely get away from everything. There are crashing waves, starry skies, beaches to walk and that’s about it.
Activities during beach camping generally consist of building a fire (for the BBQ) using the fire later to make s’mores for the kids (yum) and then telling them creepy ghost stories (with the flashlight under your chin) to scare the crap outta them. One time, Fabs told them all about the “pez roncador”(snoring fish) who only came out at night. It was his turn to sleep in the tent with them, and they were all a little frightened when they heard the noises, though the Pez was coming to carry them into the sea, until they realized it was him snoring!
Sunday you’re up with the sunrise, since it’s so beautiful and it takes place about 4 feet from your head. I’ve actually worn sunglasses while in bed. Yesteday, after a yummy breakfast, Nacho loaded up all the kids and his surf boards and took off to Playa Bonita. Nacho, who is the surf champion for many years here on Cozumel, can spot the best place for kids with one eye shut. I chose to remain behind, since I’m a total slacker, and I wanted to finish my book, however, Gary has the photos to prove how much fun it was.
All of the kids, including the 5 year old, got up on the board, and there’s even photos of Nacho doing handstands on his short board. Nacho is super good with kids, and not too hard on the eyes, since he literally looks like a pirate. We’ve been pushing him for years to run a day tour teaching people to surf and I think he’s about ready to actually do it.

Sunday generally solely consisits of lounge chairs, beach, water and eating, repeated throughout the day, until it’s time to leave. No matter how many times I re-apply the sunscreen, I always come home pink, tired, salt crusted and covered in sand. After taking a shower, washing the dogs, unpacking, and cleaning out the cooler, I always realize what a fantastic time I had “away from it all.”

I’m ready to start the week, renewed and refreshed.