For the 9th year in a row, Cozumel 4 You devotes the month of September, Patriot Month, to learning about Mexican history, culture, and historical figures.  To start off Patriot Month with a bang, Monica Sauza, guest authors, an article about flavors, and history.

This is the Independence month and even though the Spanish conquistadors remained in Mexico for over 300 years (1519-1821), many 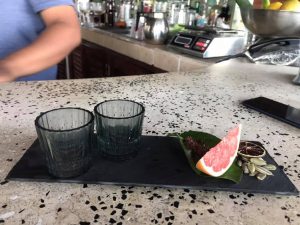 ancient cultural aspects and traditions of ancient Mexican cultures lingered deeply-rooted, surviving even today and the legacy is present among us not only through a rich culture but also in its food and drinks. Much of the cultural legacy is rooted to myths and legends. For the time being we will address a few the alcoholic and non-alcoholic beverages, some were sacred to the ancients and mostly used for ceremonial purposes. Here are just a few:

The Atole or Atol, a pre-Hispanic ceremonial non-alcoholic beverage of thick consistency made out of corn, spiced with cocoa, chili and honey, and its origins are shared with other Mesoamerican cultures. Spaniards did not like its taste, so they mixed it with milk or water; this gave origin to the champurrado, which is actually a frothy Atole. Nowadays, Atole can be found commercially at the supermarket and in different flavors.

Who doesn’t like chocolate? Chocolate/Cocoaoriginated in Mexico. Before the arrival of the Spanish conquistadors, cocoa beans were used not only to prepare drinks but also for commercial exchange, therefore were highly respected. Legend says that god Quetzalcoatl (the feathered serpent) came from the skies to share wisdom with men and brought a gift: the cacao plant. It was also considered as an aphrodisiac and it is said that emperor Moctezuma drank 40 cups of chocolate every day.

Horchata, a rice based beverage traditional in all Mexico (mostly in the Yucatan) that combines almonds, cinnamon, lime zest and sugar; aromatic and delicious.Cacapote, non-alcoholic,made from grinded cocoa beans, corn and cinnamon.  Escamochas, made 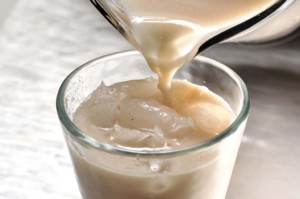 out of fresh fruits with alcohol, typical in the state of Jalisco.

Myth speaks that goddess Mayahuel was a beautiful young woman who lived in the sky with her terrible grandmother; she ran away from home to marry Quetzalcoatl, but the grandmother discovered Mayahuel and had her killed. Her remains were buried by her lover, Quetzalcoatl; and thus was born the first maguey (agave) plant, but was burnt by the gods because of what Mayahuel had done. After a storm and fire, a sweet nectar surfaced; it tasted like honey and had an enticing smell: the blood of Mayahuel. Since early times, the nectar became a ritual and ceremonial drink, and nowadays the following are produced:

Pulque (octli, the “wine of the earth”) is fermented mead from the agave plant and not too well-known around the world. In pre-Hispanic times it was disapproved of as the drunkenness it caused was the reason of an “infernal tempest that brought all evil”, only elders and the sick were allowed to drink it. But once the conquistadors arrived, this rule was transgressed. Pulque was and is a traditional alcoholic drink nowadays also known as “Curado”, a type of cocktail made with different fruits and sweetened. Still produced in limited quantities as it is difficult to preserve and store.

Mexico is the only country in the world that produces Mezcal, the drink of the gods; now known as the “Mexican cognac”. Scientific research reports that its preparation might have begun twenty-four hundred years ago. “All Tequila is Mezcal, but not all Mezcal is Tequila”, goes a popular motto. Although produced in seven states throughout Mexico, it is a traditional drink from the state of Oaxaca. Some say that in the ancient past only the political, economic and religious elite could drink it in ceremonies; others say that the agave juices were used during pregnancy and as medicine for sick children and elders. This agave distillate has more than twenty different varieties. Its production is artisanal, not industrial as Tequila, and uses techniques passed down through generations since pre-Hispanic times and its production is limited.

Now, who hasn’t heard of Tequila? Born in the region of Tequila, state of Jalisco, its origins are still unknown and its distillation process was brought in by the Spaniards. There are several kinds of tequila with different categories.  A legend says that a group of Tiquilan Indians seeking shelter in a cave from the rain saw a bolt of lightning strike a field of agave plants and after the rain subsided a sweet smell was felt in the air, they reached one of the plants and tasted it. One of the Indians took it home and several days later saw small thick bubbles gushing out of it. He tasted them and felt his personality change. The indigenous people considered it as a gift from the goddess Mayahuel. And, by the way, the Margarita cocktail was created in 1942 by a barman from Chihuahua.

The Maya used their knowledge of plants and together with religious traditions gave origin to ceremonial liquors, some of which are still used. The Balché, “sacred wine”, the Maya liquor par excellence, was and is prepared with fermented honey and bark of the balché tree, sweetened with honey or anise. Used for purification and to produce certain altered states of consciousness. In the state of Tabasco, it’s non-alcoholic and as an offering to the land, to the lords of the hills and elves, as these watch over of the fields and animals. The Saká, comes from the Mayan word Sak which means corn. The myth of creation in the Popol Vuh speaks of man and maize (corn) being one, in correspondence man farms it and the maize feeds man and his family. In most Maya villages, the ceremony to Chá Chaak (god of rain) with Saká is still in practice.

The Xtabentún, “entangled vines that grow on stones”, is the most famous Mayan liquor made from the flower of the Turbina corymbosaas tree, fermented honey and anise. Legend speaks of two women, one known as Xtabay, but who was called Xkeban (prostitute) and the other Utz-Colel. The former was generous, passionately gave all her love to the sick, the poor, the animals and protected those who had been forsaken; the latter was cold-hearted and hated the poor. One day Xkeban died and from her house a sweet smell of flowers streamed. Utz-Colel, furious, said the sweet smell could not come from such a corrupt and vile body, that it must be the evil spirits. After Xkeban was buried, her tomb was found covered in beautiful flowers, and their nectar was sweetly intoxicating. The Maya considered the origins of the Cacao (cocoa) as divine. Grown by them more than 2500 years ago and, just like other cultures, used by as currency. It had stimulant and calming effects. The Maya celebrated a yearly festival in April to honor the god Ek Chuah; the event included sacrifices of dogs and other animals painted with chocolate, also offerings, incense and exchange of gifts.

Mónica Sauza,  has lived 36 years in Cozumel. She is an Expert Translator and for over 20 years has provided assistance to foreign nationals.