The Wild Ride of Driving in Cozumel 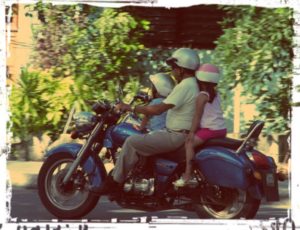 I learned how to drive in Boston.

I moved directly to the island of Cozumel from Jamaica.

Considering those facts, I really thought I had experienced the entire gamut of bad driving. However, I have to say: the island of Cozumel has some really BAD drivers. In fact, even   my in-laws, who live in Mexico City (one of the largest cities in the world) are continually amazed, offended, or just plain flabbergasted by the way we drive here.

To make it easier for newbies, I’ve compiled some basic guidelines, which can be adhered to, or not, as the whim might strike you…

While that may sound self-explanatory, I share this tip so you don’t expect anyone to use them. This includes police vehicles and even ambulances. I had a friend who was run off the road by an ambulance here – not as it raced to the scene of an accident as you might suppose, but as it hurried to turn left from the right hand lane into the grocery store parking lot.

2) Employ blind faith and just assume the other driver will stop.

On my website, Cozumel 4 You, I described downtown San Miguel this way:

Downtown San Miguel has been conveniently laid out so it’s very easy to get around. The streets are laid out, grid-like, with the avenidas running horizontal to the ocean, and the calles perpendicular. Avenidas run in multiples of 5, while calles to the north of downtown are even numbered, and calles on the southern side are odd numbered. Most directions are given with the cross street included for reference. Remember while driving, avenidas have the right of way, so while driving on a calle, you will generally need to stop at each intersection.

What that means is that when you’re driving on the calles in your car with all its passengers, you will find yourself racing from intersection to intersection as quickly as possible until it’s time to slam on the brakes when you reach the intersections. The Fab husband has hypothesized that this forward/backward full-throttle alternated with brake slamming is very soothing to islanders, as it mimics the undulating waves of the ocean. If it’s not a busy street, you can either roll through the intersection, or stick your auto’s front so far into the avenida that you resemble a cat, popping out to paw at a toy. If you are driving on the avenidas, it’s kind of a “Hail Mary” where you just have to believe that people will actually stop, or at least roll through quickly and get out of your way. I’ve had family members actually pump imaginary brakes in the passenger side of the car when car fronts “pop” out at intersections.

3) When making turns, choose the path of least resistance.

This is something that really amazed me when I first moved here. If you’re driving down the road and you want to make a left turn at the intersection, simply point your car as close to the actual flow of traffic going that way. If an oncoming car wants to turn down your street, they will do the same thing. It’s only in the US that other drivers will go around to the other side of your car and try in an effort to keep the flow of traffic moving. This especially holds true if you’re on one of our major streets that have a dividing grass island in between. Those small, connecting paved areas aren’t actually roads; they’re for turning, so no need to stay on your original side. Apparently I’m not the only person who finds this annoying – since they’ve actually created apublic safety video, illustrating the issue.

4) “Ears Forward”: As long as the part of the vehicle you are physically occupying is not blocking traffic, you are fine.

This is specifically for Cozumel’s  major roads that are divided with grassy areas and trees between them. Say you’re piloting a large mini-van and attempting to cross the divided road. If the southbound lane is clear, it’s ok to cross halfway. If ¾ of your van is hanging into the southbound lane, this is fine. Employ the “Ears Forward” behavior: Simply become very intent on getting in the northbound lane, and ignore anything that may, or may not, be blocking traffic, or anything that is physically behind you in the vehicle. This includes the back seat of your large automobile, backseat passengers, and the entire rear end of the vehicle.

5) None of this pertains to scooters.

Is traffic lined up in an orderly manner in front of one of our 10 traffic lights? If you’re on a scooter, and there’s just a little room alongside the line, no worries, you can just shoot down as far as you can, with the main goal being making it to the front of the line. There are extra bonus points if you actually can make it, and then make a right turn on red. The same holds true for gas station lines. If you’re on a scooter, no need to wait your turn.

6) All bets are off in the presence of tourists.

While I think it’s great that people want to get out and explore this friendly island, it’s my firm belief that the majority of the accidents here on the island are caused by tourists. I’m pretty sure in other countries, you must look before stepping onto the roadway in front of a moving vehicle, though that doesn’t seem to be the case here. When driving, they go up one way streets the wrong way, and totally miss the joy of the “Calle Speed and Slam” game. And, please, don’t even get me started on what they do when they encounter roundabouts!  If you happen find yourself driving behind a rental jeep, you may consider putting your text conversation on hold while you watch them figure out what they’re doing.

Once you get used to driving here, getting from point A to the beach becomes markedly easier. In fact, seeing these behaviors exhibited by other drivers may encourage you to employ a few of your own.

Making a wide left hand turn from the right lane? Don’t mind if I do…

This blog originally appeared in Women Who Live on Rocks.