Yoga in Cozumel: The Importance of Befriending Ourselves by Tammy Cervantes

Cozumel 4 You has become a phenomenon. It occurs to me that what I see on this online forum are many people speaking out. People sharing their opinions on daily topics, but also important issues that impact them. What I think I see in all the banter, the support of one another as a community and in the heated debates that often arise in this arena of personalities is a deep desire for connection. 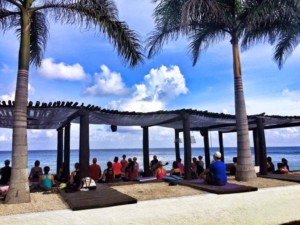 Practicing  yoga for almost 20 years has been a humbling and enriching experience for me. People tend to think that time brings expertise, and in a multitude of ways it can. What I would really like to share is a process, a progression; not so much of physical feats or any other achievements, but rather an exploration of awareness and the subsequent experience of befriending myself.

I’ve heard that we teach what we need to learn, and my first yoga classes were extremely uncomfortable. Yoga challenges us all in different aspects, and many of the physical postures came easy to me. If I hadn’t felt like I was good at it, honestly I probably would have stopped after a couple of classes. I continued to practice but I found it difficult to be present in my body. I realized I couldn’t easily get still, close my eyes and simply pay attention to my physical experience in the moment. I came to yoga with anxiety, and was easily distracted. What I realized after a short time was that I really didn’t know how to just be in my own skin! Meditating on the body and breath wasn’t even possible for me initially,  so I avoided it by being “efficient” at postures.

Still, I loved yoga! I became a daily practitioner almost immediately. I spent hours upon hours doing different yoga practices, doing the most challenging poses I could tolerate, really focusing on the physical and being good at the poses. Despite my difficulty being still and paying attention inwardly, I was feeling a renewed energy that I hadn’t felt in years; also a calmness I had possibly never experienced. I also felt physically fit.

I spent years studying with the most “prestigious” teachers I could find all over the continent; literally thousands of 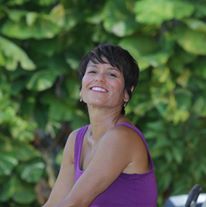 hours of study and training. I have learned many styles and techniques. I read every book on the subject I could get my hands on.  But as I found teachers that really spoke to me, as I sat in meditation, as I worked on myself in a thousand different ways, a repetitive theme continued to emerge. The answer wasn’t more trainings, more information on yoga philosophy or the technicalities of postures. This was not a competition in any way.  Over time, I realized again and again that when we compare ourselves to others, whether we think we are better than or less than, it is impossible to be connected with ourselves fully. When we aren’t connected to ourselves it is impossible to truly connect with others. And if we don’t connect with others, we can’t have real relationships with them. I have continued to show up to yoga in spite of my tendencies toward comparison, competitiveness, inconsistency, feeling less than, resistence and many more blocks. I have practiced right along with them for all these years. Some days they speak louder than others. There is a quote by the Sufi Poet, Rumi, called The Guest House where he encourages us to invite and welcome in even our enemies. This metaphor speaks to what I now believe in my heart, which is that in order for me to be the whole, integrated human being I want to be, it is indispensable to acknowledge, accept and honor ALL parts of myself,  even –  and especially those that I don’t like. This I call befriending myself. What I realize,  sometimes painfully slowly is something I heard from a great teacher years ago: that this grasping to always improve is a subtle form of aggression towards one’s self. When I just allow me to be me, I realize that although I’m not remotely close to perfect, I am enough!

Here are some ways that I presently practice befriending myself:

Through learning to be more and more present in my own life and being nicer to myself, I have also become more attuned to students and I have a better sense of how to meet them where they are; not leading the class from a preconceived plan. Rather, I look at their bodies, connect with them and teach from a place of relating to their experience in the moment.

I have been blessed to have crossed paths with hundreds of people who have engaged in conversation with me about yoga. Many of these are confused about what it is, or have walked blindly into a class that was not appropriate for them and therefore think that yoga is not for them. Paraphrasing the most respected yoga teacher in the last century,  there are many yogas. There are many different practices within yoga. There are many styles of yoga. Many diverse meditation techniques, breathing exercises, physical postures, chant…… are all different yoga practices. Some people focus mostly on one of these, and others a little of many of them. Some of the Asana or physical posture practices are quite effortless, and others are quite vigorous. I tell students often that if you ask 10 yoga teachers a question you may very well get 10 different answers. I’m not here to disprove any of them. If yoga is connection, then it is important to feel some sort of connection, or “click” with the person or persons teaching you.

If you are one of those people that are curious about yoga,  but “don’t want to look like a fool”,  or “can’t do it because I’m not flexible”, “it’s too challenging” or think that it is a religion I invite you to give it a chance. Shop around for physically appropriate classes and ones that you can relate to. For me it is important to remember that most new things that I try are uncomfortable in the beginning in some way. The unknown is uncomfortable. But giving yoga a chance, being willing to be uncomfortable at times has opened up my world in profound ways. This examination of myself is slowly teaching me to befriend myself. To connect with myself,  in order to connect with others and have better relationships. In the process of going upside down, sitting in silence for hours, and yes, sometimes even twisting my body into pretzel, I’m learning better Living skills.

Tammy Cervantes Yoga offers the following classes and more, for different abilities and age groups, both group classes and privates:

Beginner and all level Vinyasa

50+ (slow, accessible postures with different meditation techniques that are conducive to longevity)

Yoga For Recovery From Addictions

Find her at Tammy Cervantes Yoga on facebook, tammycervantes@gmail.com or call her at 9875643200 for more information on classes. The new site, tammycervantesyoga.com will launch very soon!

Author at Power Yoga Cozumel
Tammy Cervantes is one of the pioneers of yoga in Cozumel, Mexico.With over 15 years’ experience teaching, and her fluency in the Spanish language she has taught in diverse venues and communities both in the U.S. and Mexico. Her students have included professional athletes, performance artists, the physically and mentally challenged, and she has especially enjoyed giving back to the community by making classes available to people who might otherwise not be able to participate. She is especially committed to her work with people in recovery from addictions, and has been blessed in assisting in the organization of the Yoga + Meditation For Recovery Conference at Esalen Institute for 5 years. She delights in offering yoga teacher trainings, and leading a vast array of retreats and workshops. Tammy's teaching is inspired by her deep desire to assist others in cultivating present-moment awareness: she leads by living the principles of facing life bravely, by acknowledging, honoring and integrating our experiences both joyful and painful. Tammy believes that sharing this with others is her most challenging, courageous and meaningful work in life.