It was the latter part of 1944 and, just like in the present, the atmosphere was already buzzing with the arrival of the Christmas holidays, It was also the time of the tough days of Word Was II and in Cozumel the construction of the airport was almost complete. But the priority at the Novelo Rivero family home was the birth of twins Eduardo and Emiliano, who had arrived to this world, in the Island of the Swallows, on the 9th day of the 11th month pf the year.

According to current beliefs, those born in the first half of the 20th century are part of what many have called a unique generation that has lived through many changes in the world; a generation that has seen technology grow and has adapted to new ways of life which have conditioned our existence vertiginously; who have lived in two centuries and have seen the world shrink as communications science has a evolved in all aspects.

The home of Mr. Emiliano Novelo Poot, a public employee of well-known respectability, and of Mrs. María Sara Rivero Novelo, a respected teacher, principal and supervisor of elementary schools, together with their eldest – Jaime, RIP- who was a little more than a year old the whole family was joyful with the arrival of the two new children.

Like all children at the time, Emiliano attended Amado Nervo preschool and later Benito Juárez elementary school, the only school back then in Cozumel.  He was a student at the Gabino Barreda Federal Government-Affiliated Middle School as was part of the third generation when the school was already called Andrés Quintana Roo.

Together with his peers he lived a quiet childhood in a town that had no other entertainment than going to the beach or watching a movie in the only movie theater in town, playing in the park and having fun playing chácara [hopscotch], spinning top, the yoyo, marbles, the kimbomba or jump the rope; all this without radio, television, telephone, etc. but within that naiveness we were extremely happy. 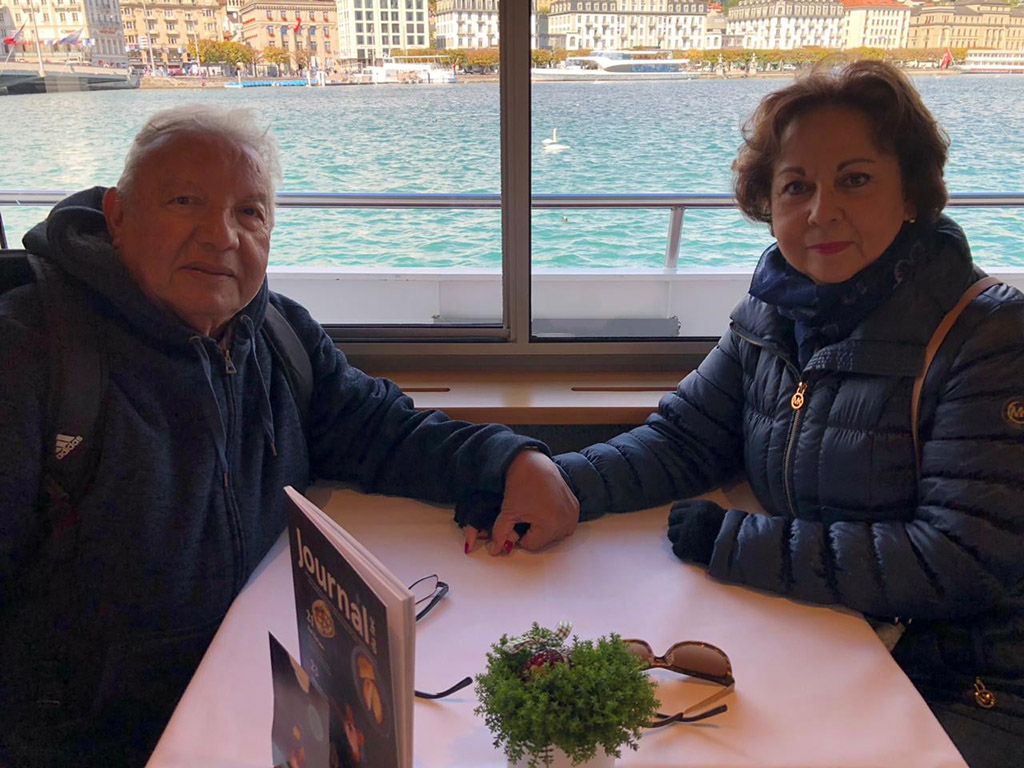 Before there a middle school existed in Cozumel, there were just few who had a true desire to excel, but above all and with the strong support of their parents, achieved a university degree. But by 1957, with the graduation of our middle school’s first generation there was a high demand of youngsters who wished to continue their studies. They started migrating to larger cities where they found a wide range of educational services.

In 1959, the Novelo twins completed their middle school education and became part of those who chose Mexico City to broaden their educational horizons, joining the contingent of students from Quintana Roo, Chetumal, Isla Mujeres and Holbox who were preparing to become part of the future of their homeland.

While Eduardo chose to study at the Polytechnic, Emiliano enrolled at High School 7 of UNAM and later studied Public Accounting in the National Autonomous University of Mexico‘s (UNAM) at the Accounting and Administration School.

Days were spent adapting and making efforts while staying with Mrs. Yolanda, a fellow woman from Cozumel and friend of the family, where they not only found lodging and food, but also careful attention.

He completed his studies successfully, allowing him to join the productive sector in 1970 where he was appointed Auditor at the Ministry of Finance and Public Credit. From that first job he began to show qualities that earned him the appreciation and respect of his colleagues, partners, and bosses, where his skills, responsibility dedication and respect inside and outside of work became the main traits of a competent, honorable, upright, irreproachable, honest and incorruptible officer.

In his To Gloria poem, Salvador Díaz Mirón said: “There are plumages that cross the swamp and do not stain, my plumage is one of them”. That was precisely Mr. Emiliano Novelo Rivero’s main achievement. Few can serve with tenacity and efficiency for more than thirty years in Federal, State and Municipal positions without diminishing the outstanding quality of results and regardless the circumstances or political tendencies, his accounts were always clear as well as an adequate budgetary performance, and not only did he adapt to the programs of all governors of Quintana Roo, from Martínez Ross to Borge Angulo, but he also encouraged Isla Mujeres, Benito Juárez and Othón P. Blanco giving his support from the Treasury department that was entrusted to him by every mayor.

In 1974 when the old Territory of Quintana Roo came of age, many professionals who had already started their first experiences in the productive sector, were required by the small homeland to lay the foundations of young Quintana Roo, facing a promising future that needed consolidation. Among these, Emiliano Novelo was invited by Jesús Martínez Ross, our first governor, to join Mr. Jorge Marzuca as Auditor in the Ministry of Finance.

In 1976 he became the director and adviser of the Federal Tax Department, where Alma Margarita Avila was the Coordinator and Chief, and this magnificent team had collaborators such as Antonio Jimenez García, head of Commercial Income; Pedro Pescador Tejeda, head of the Income Tax department; Joaquín Oliva Alamilla, head of Tax Enforcement; Laura Villanueva, General Cashier, and Guadalupe Ceballos, Head of Accounting

In 1978 he served as Municipal Treasurer in the government of Francisco Ichmied Magaña, where he left his mark by obtaining the low that allowed the construction of the Government House.

In 1981, during the six-year term of Pedro Joaquín Coldwell, he served as Undersecretary of Finance together with another excellent public officer, Joaquín González Castro, head of the State Treasury Department. They exercised great discipline and financial transparency for the State’s well-being.

During that same term he served as State General Comptroller, where he created a new model to review the agencies of the three State government branches, enabling safeguards in the proper use of resources, acting with sensitivity in support of officers who required it.

While acting as Federal Deputy of the National Tourism Fund (FONATUR) in 1989, Mr. Carlos Javier Cardín Pérez appointed him to oversee the Administrative Office, thus making a good team which allowed them to carry out several important projects for the development of Cancun.

Later, between 1993 and 1996, they joined forces again when Mr. Carlos Cardín, as mayor of Benito Juárez, appointed Emiliano as Treasurer; in turn, Emiliano relied on the good performance of Antonio Jimenez García, Francisco Flota and Eduardo Anica, leaving, as example, the famous hydraulic concrete street downtown.

In 1997, Mr. Eduardo Ovando Martínez, mayor of Othón P. Blanco, appointed Emiliano as Treasurer and he also collaborated in actions favorable for the development of our capital city.

In 2004 during the administration of Mr. Joaquín Hendricks Díaz, he served as Administrative Director of Sintra.

In 2005, with Félix González Canto, he served as Superior Auditor of the State and was ratified in the following six-year term in the Roberto Borge Angulo administration.

A strong and well-grounded family, whose foundations are love and respect, with moral values that allowed him to be part of the capital’s society.

A long trajectory of responsibility, loyalty and service, and whose unblemished footprint has remained in the government agencies to which he dedicated his best efforts.

Today, on the 77th anniversary of his birth and one month after he left the earthly plane to live in the house of the Lord, I dedicate these words to him that were a debt that weighed on my mind. I hope that wherever he is, he knows that he is greatly missed. His family, our childhood friends and those who knew of his appreciation and integrity, will always keep him in our minds.

Emiliano, my friend, only those who fall into oblivion die, and I know that the recognition and respect earned with your work, your gift of conviviality and loyalty to sincere friendships, will make your image something permanent that will transcend time, because it is engraved for eternity in our hearts.

I would like to thank Capt. Victor Manuel Vivas González for making it possible for me to gather the information to prepare this work, based on a great summary by one of his collaborators, Mr. Antonio Jiménez García and his son Antonio Jr.

To my friend Mrs. Lizbeth Azueta Gorocica for her support with what had already been written by another friend, Mr. Pedro Flota Alcocer.

In memoriam of a great fellow countryman, friend and contemporary. 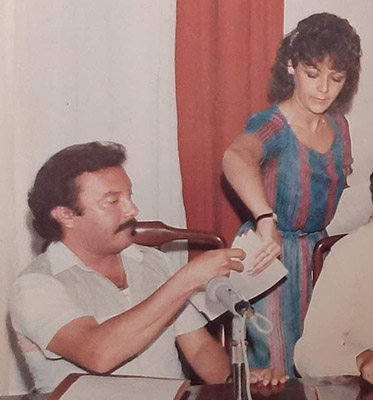 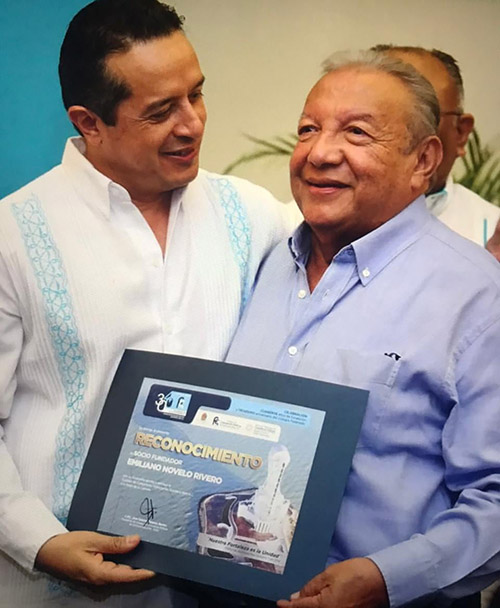 Veudi Vivas Valdez
Veudi Vivas Valdés was unanimously appointed as the new chroniclerof San Miguel.Veudi Vivas is a retired professor, history buff and brother to the late Velio Vivas, e former chronicler of the Island who passed away on June 22, 2020.