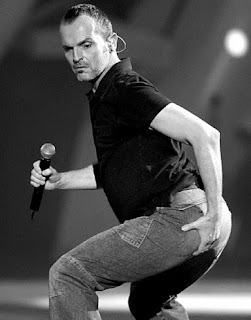 The Fab Husband knows what he likes, and for him, music mostly stopped in the 80’s. There’s a few acceptions,most notably Amy Winehouse and Miguel Bose.
After 12 years together, I don’t really have much choice in loving Miguel Bose, do I? It’s not really that hard though, the guy is super eye candy, and he’s still pretty much rocking out. Which was why I was so happy when I found out he was coming to Cancun for a concert.
It was actually a perfect evening, we checked into a only moderatly cheesy AI in Cancun, had a few drinks, ate dinner, and met Fab’s cousin, Nancy, for the concert. I should have known there would be something that would go wildly wrong, since, when entering the stadium, a purse search turned up a camera that I didn’t even know I had with me. They originally didn’t want to let me in at all, but, well, we all know how persuasive the Fabster can be when he wants to be.
Basically, what that meant was that he was now responsible for the beer tab for us, Cousin Nancy, and two security guards.
The concert took place at the brand new stadium where Cancun’s brand new futbol/soccer team plays. The concert was superb. There was the perfect blend of his old stuff and his new material (which, don’t tell anyone else, but I actually like better!)
Anyhow, great concert aside, there’s no negating the call of nature, especially if you’ve been guzzling beer for the past two hours. Cousin Nancy, who, poor thing, had been plied with unacustomed booze for the past two hours, entered the large (and suprisingly clean) staduim bathroom with me.
This is a giant bathroom with two sections of probably about 20 stalls on each side. When I attempted to flush, the entire metal mechanism of the industrial toilet literally fell off and landed on the floor with a loud clank.
A huge fountain, of thankfully clean water came shooting up out of the hole, taller than the actual stall wall, and doused the entire left side of my body.
I ran screaching out of the stall, where Nancy is washing her hands. I’m wild eyed, wet, and screaching at her for help. Girlfriend looks at me deadfaced, and literally says,”Do I know you?”
We both go running out of the now flooding bathroom, dodging women who are now trying to ford what amounts to an open firehose. As we gathered up Fabs, and ran away, I looked back and saw the water running out under the door.
I’m really sorry about your bathroom, Cancun, I swear!